Grendel is one of three monstrous antagonists, along with Grendel's mother and the dragon, in the Anglo-Saxon epic poem Beowulf (c. 700–1000). 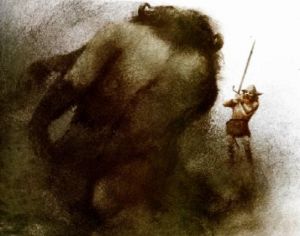 The Old English epic poem Beowulf describes the monster Grendel and his mother in terms that leave little doubt as to their lupine nature - among the words used to describe them are: werga, werhtho, heorowearh, brimwylf, grundwyrgenne, all of which contain the elements wearg/wearh or wylf. This is a complex word: it is often used simply to mean 'wolf', but it also denotes an outlaw or the state of outlawry, in which case it refers to those who have committed crimes that are either unforgivable or unredeemable, and who are cast out from their communities and doomed to wander until they die. Outlaws were traditionally forest-dwellers, and could be legitimately killed. Here, Grendel is referred to as a march-stepper, literally meaning a "boundary-land walker," a walker in outlands or desolate places.

Grendel is also called a scucca (demon), from which the second element of the name of Black Shuck, the supernatural dog encountered by nocturnal travellers in East Anglian folklore, is derived. It is also said of Grendel that him of eagum stod ligge gelicost leoht unfaeger, 'from his eyes shone a fire-like, baleful light'.

Grendel and his mother are both haunters and guardians of a burial mound in marshland, and are given an aquatic aspect to match - brimwylf, for instance, means 'water-wolf'. This brings to mind the bodies of water - usually rivers, but sometimes a lake or sea - that are invariably supposed to surround the Indo-European underworld, and those of some non-Indo-European cultures.

The poem, Beowulf, is contained in the Nowell Codex which tells of the building of Heorot by the Danish King Hrothgar. As noted in lines 106-114 and lines 1260-1267, Grendel's mother and Grendel are descendants of Cain and were regarded as foes of God in the Anglo-Saxon poem Beowulf, which Beowulf leaves Geatland in order to find and destroy Grendel, who has been attacking Heorot. After a long battle, he does so and mortally wounds Grendel. He later engages in a fierce battle with Grendel's mother, who is eventually killed by Beowulf. After her death, Beowulf finds Grendel's corpse and removes the head, keeping it as a trophy. Beowulf then returns to the surface and to his men at the "ninth hour" (l. 1600, "non", about 3pm). [1] He returns to Heorot, where he is given many gifts by an even more grateful Hroðgar.

There are five disputed instances of áglaéca [three of which are in Beowulf] 649, 1269, 1512...In the first...the referent can be either Beowulf or Grendel. If the poet and his audience felt the word to have two meanings, 'monster,' and 'hero,' the ambiguity would be troublesome; but if by áglaéca they understood a 'fighter,' the ambiguity would be of little consequence, for battle was destined for both Beowulf and Grendel and both were fierce fighters (216-7).